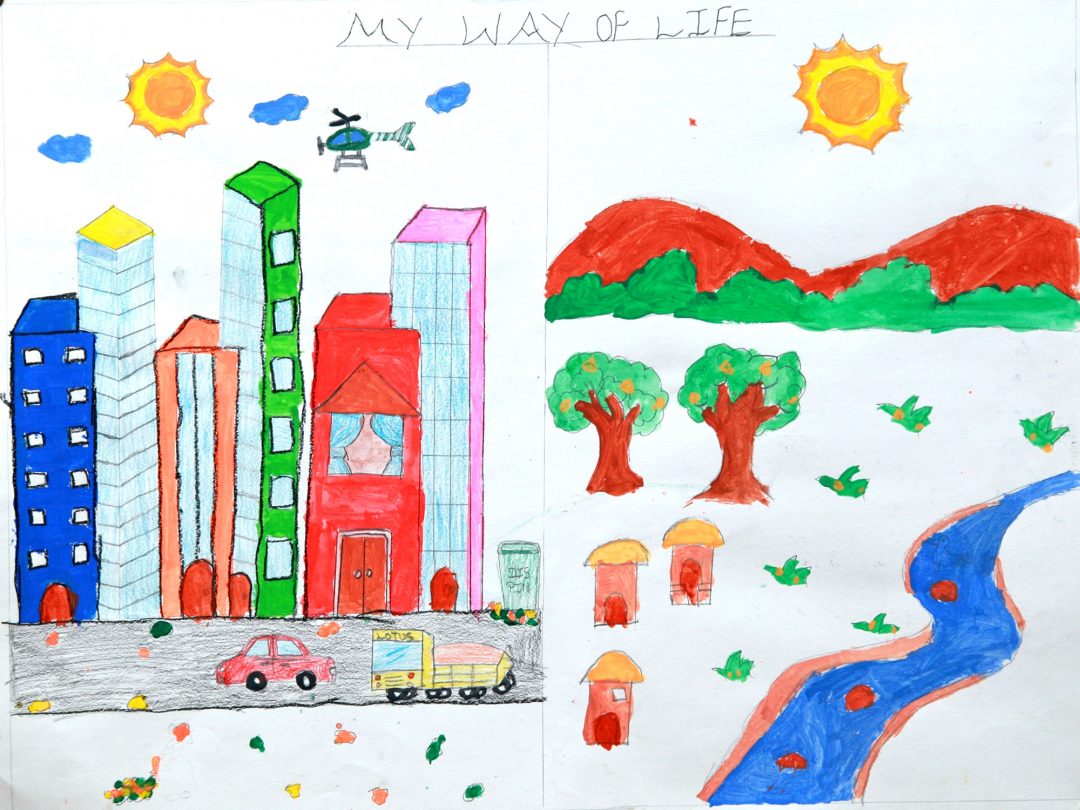 My Way Welcome Message : Extract of speech given via videolink

“My Way” was a painting competition organised by the Cuomo Foundation in 2014 in Tamil Nadu, India.

The pupils and the teachers from the Foundation-funded schools in India were asked to participate in the painting competition. The theme of the contest was “my way” i.e. the way they approach their lives… Quite interestingly—and without any special instructions from the organising committee—many took Ecology as their inspiration.

Retrospectively, and just before the opening of the new green school, funded by the Foundation in the rural area of Mambakkam, it’s stimulating to witness the awareness of the youth on the perils lying ahead, if we do not take immediate actions…

Below is the extract of the speech given by Mrs. Maria Elena Cuomo via videolink at the prize-giving ceremony.

“(…) I wish, first of all , to thank you for your interest in this new and promising event that we called “My Way “.

Arts reflect Education but more importantly Civilization. Each Society, from as far as we know in mankind, has expressed its history, its feelings, its fears, its way of life, its traditions, through pictures, paintings, drawings, etc.

It all started with rock painting by cavemen wherever, in Egypt, in Europe or elsewhere. Whether in the caves, or on clay pottery, bronze or stone, they witness lifestyle. They have an immense value not only historical but artistically. And each one is a milestone for any Society.

Any form of drawing or painting or carving, shows the trends and evolution of mankind. For centuries they represented reality but progressively allowed the artists to express their fantasies and then came abstraction.

Men did not only show what they saw, but gave the twist of their imagination, of their dreams, and famous paintings nowadays might even reflect only a concept and no longer what we see or imagine.

I cannot think that as we have now initiated this cultural process, that we would not pursue. Obviously, drawings and paintings require some techniques which can be taught. But also, as I alluded to, previously, some knowledge , of our history which does no longer , in an open world such as the one we live in, belong to one Country or one civilization , but is part of the huge patchwork of human beings from their origin up to now.

“My Way” opens widely the door of an unknown world to our students. We have to give them access to this knowledge, enhance their artistic capacities through lessons, Internet and exhibits.  Some may be more gifted than others, but this should not prevent anyone to try at least.

The best will be awarded prices, but those who will complete a drawing will have achieved something unique which should allow them to know themselves better and become better humans.

Click here to view the video of this speech, relayed via video link.

View all posts by Admin